To Connect or Not to Connect?


Perhaps it is a natural territorial instinct to wall ourselves into a protected enclave. Much has been written about the late 20th Century phenomenon of gated developments, but that isn't the only time we block access in our neighborhoods. The lollipop cul-de-sac street patterns of many American suburbs are also meant to block; and sometimes older neighborhoods are retrofitted to block auto access, pedestrian access, or both.

As a planner, I see this a lot, but I recently saw it in action in my own neighborhood. I live in an older neighborhood that, for the most part, has a walkable street grid. Slicing diagonally  through the neighborhood is a major piece of underground infrastructure. On the surface, some of this land is occupied by parks, some by parking lots, some is incorporated into adjacent private yards (with the caveat that no structures may be constructed over it), and some is vacant and unimproved. Part of it near me was a park, which was ripped out a while ago when the underground infrastructure was upgraded.

Our Parks and Recreation Department held a couple of neighborhood meetings to work on a new design for the reconstruction of this park. This all went very well, and the new park is going to be great, but something really stood out to me. The infrastructure corridor continues past the park through a very long block, providing the potential for a direct pedestrian connection to a major street with some great amenities (including one of the best pizza joints in town). Some of us asked for this stretch, which is presently fenced off, to be opened up. Many people in the area have actively fought this connection, though, and it will not be opened.

Why is this done? In a society that is so obsessed with connectedness of the digital variety, why are some of us shunning connectedness in our cities? I have encountered three primary reasons, all of which are rooted in fear. 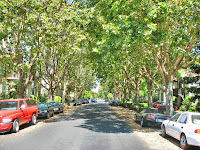 The Problem With Blocking

While I understand these fears, disconnectedness is not the answer. We must resist the urge to block paths and close off neighborhoods from each other. Blocking connections won't solve any problems, and may create new ones, including: 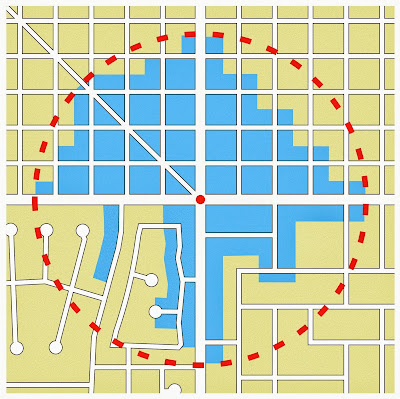 How to Address Traffic, Parking, and Crime Without Blocking

We block because we're afraid of traffic, parking jams, and crime... but blocking doesn't fix these problems and only creates additional problems. So what are we do do?
To connect, or not to connect? Definitely connect. It won't affect traffic, parking, and crime as you may fear it will, and there are better solutions for these issues anyway. More importantly, you'll improve walkability and shorten driving trips, making your neighborhood more convenient and less polluting.

Posted by plannerdan at 5:57 PM