An Oldie but a Goodie: Don't Pick on Portland 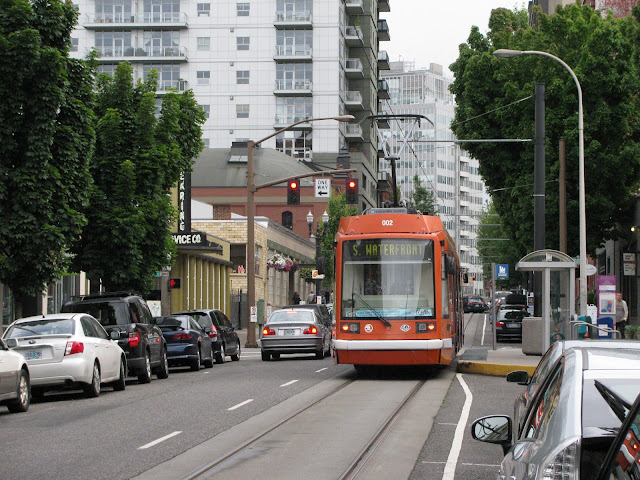 Back in 2002 I wrote an op-ed for the great urban planning website Planetizen about planning innovations undertaken in Portland, Oregon, and some of the unfair criticisms that had been hurled at them. I hope you like it.

[Note: this was published eleven years ago, and unfortunately many of the links don't work. I will try to track down the intended targets and will provide new links if/when I find them.]

We should not dismiss the bold planning experiment in Oregon just because it runs counter to current orthodoxies.

In the world of urban and regional planning, Portland, Oregon is a unique place. In the early 1970s the state of Oregon set out on a bold experiment in an attempt to preserve and enhance their environmental, agricultural, and urban assets in the presence of mounting growth pressures and sprawl. Along the way they made some mistakes, and they made some great decisions, and they have developed a legacy that we can all learn from. However, a small number of sprawl apologists have began to attack Portland, and it is important to set the record straight.

One of the common assaults on Portland says that their urban growth boundary (UGB) on making housing unaffordable by artificially constraining the supply of land. Any serious academic study of this subject either outright rejects this claim or says that an absolute correlation cannot be determined. In a recent study on the subject, Anthony Downs of the Brookings Institution concluded that UGBs can’t be proven to increase home prices. Recent studies by Lewis and Clark College and the Journal of the American Planning Association came to similar conclusions.

Portland home prices rose rapidly in the first half of the 1990s, but so did their economy. Whether the UGB or the growth in jobs caused the rise in home prices is hard to say. During other periods, home prices rose faster in other metro areas lacking UGBs than it did in Portland, despite the presence of their UBG. Obviously there isn’t the clear, absolute relationship claimed by the sprawl apologists. A good discussion of the UGB (although clearly biased in favor of it) can be found at http://www.friends.org/resources/myths.html.

The “rate of increase” argument is a red herring anyway, because in absolute numbers Portland still has very affordable housing compared to other metro areas. The median cost of a home in the Portland region is still less than the West Coast average, and is well below other prosperous regions such as San Francisco, Los Angeles, Seattle, and Denver. Who cares what the rate of increase was? The real question is this: is housing still affordable? The answer to that question is clearly “yes.”

Also, by providing an excellent transit system and allowing alternative land use patterns, Portland has created lifestyle options that aren’t available in many other places in the US, especially the West Coast. Residents there have a cornucopia of options, including the suburban standards (detached ranch houses and garden apartments) and urban types not commonly available in conventional suburban development such as rowhouses, live/work units, apartments over shops, lofts, and many others. And because of these options and the transit system, Portland households can choose a living arrangement in which they can eliminate cars from their fleet, which gives them more money for housing. Most suburban residents cannot do this. For more on the negative impact of sprawl on transportation costs go to http://www.transact.org/Reports/driven/default.htm.

The sprawl apologists also love to claim that transit oriented development is a failure. An interesting study on this subject focused on Orenco Station, a New Urbanist development on the outskirts of the Portland region which is oriented around a light rail station. Despite the fact that the residents are not typical of the “transit dependant” demographic, they ride the light rail very frequently. Nearly a quarter of them ride it daily, and more than half use it at least once a week. This is hardly an indication that transit oriented development is a failure. For a more detailed analysis of anti-transit myths, see this paper by Paul Weyrich and William Lind.

The sprawl apologists also complain that due to all of the “wasteful” spending on transit, traffic congestion is terrible in Portland. In case they haven’t noticed, traffic congestion is terrible in all major metropolitan areas. This is true even of Atlanta, which has been trying to build its way out of congestion for decades, yet can’t seem to do so. It is futile to try to reduce congestion by endlessly increasing capacity as the sprawl apologists suggest. In fact, it has been shown that for every 10% increase in highway capacity, volumes increase by and average of 9% within 4 years. Like traffic engineer Walter Kulash says, “adding capacity to cure congestion is like loosening your belt to cure obesity.” At least residents in Portland have an attractive alternative to their congestion.

Another ridiculous claim made against Portland’s planning policies are that people loathe density. According to the study of Orenco Station mentioned above, 94% of the residents said that they liked the design of their new neighborhood more than conventional suburban development, despite the higher densities. And if people hate density so much, why are some of the most expensive and beloved neighborhoods in the nation also the densest? New York’s Greenwich Village and Soho, DC’s Georgetown, Boston’s Back Bay and North End, and San Francisco’s North Beach and Marina District are all very dense and very
popular areas. Does everyone want to live like this? No. Should we force people to live like this? No. Should we allow it for those who DO prefer it? Heck yes.

Rather than ridiculing Portland for having the guts to try something different, we should be studying their experiment, and evaluating how we can use the best of their techniques at home. We should be debating whether the UGB was drawn too loose or too tight, if the first crop of TODs were designed in the best possible way, and what have been the most successful ways to increase density and encourage infill. We shouldn’t be dismissing them as evil planners “playing God and producing results like the Devil.” They were the trailblazers, and we can all learn from them, including from their mistakes. But there is no doubt in my mind that the residents of Portland are better off today because their elected officials, planners, and citizens had the guts to break from the status quo and try to do better.