What is the Meaning of Suburban?

Words matter. When we speak to each other we need to understand what is meant. Language can often be ambiguous and inconsistent, but it seems to be particularly bad regarding cities. For example, which of the neighborhoods below is suburban?


If you said Neighborhood A, you are correct... and, you are also completely wrong. How can this be? Well, people use suburban in two completely different ways. The first way is the way that the US Census Bureau uses the term, and a lot of academics use it this way, too. For them, everything within the city limits of the central-most municipality within a metropolitan area is urban, and all of the other municipalities in the metropolitan area are suburban. When used this way, the terms urban and suburban are tied to governmental boundaries and relative location within the metropolitan area. Neighborhood A is within the city limits of San Francisco, so by this definition, it is urban.

The second way of defining suburban is by the physical form of the place, which is the way that many urban planners and members of the general public do it. For them, suburban development is typically low in density and height, separates residential and commercial land uses, is designed to cater predominantly to the automobile, is focused primarily on the private realm, and features freestanding buildings which occupy space rather than define space. Conversely, urban development is denser, taller, caters primarily to pedestrians, is focused on the public realm, and features attached buildings which define public spaces. By this measure the dense and walkable Neighborhood B would certainly be urban. However, it is located in Pasadena, which is not the central-most municipality in the Los Angeles Metropolitan Area, and thus by the first definition is suburban.


Confusing, isn't it? And let's face it, each of us has probably used the terms in contradictory ways at different times. I certainly have. In an effort to clean up my act, from this point forward I will use the words only in the following ways: 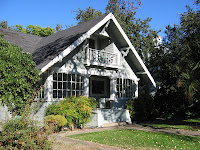 Suburban - A clustered pattern of human settlement—whether within a hamlet, village, town, city, or in the central or outer portions of a metropolitan area—which has a majority of the following characteristics: low density, low building heights, separated residential and commercial land uses, domination of the private automobile, low walkability, poor public transit, a high priority of private spaces over public spaces, and freestanding buildings which occupy space rather than define space.

Urban - A clustered pattern of human settlement—whether within a hamlet, village, town, city, or in the central or outer portions of a metropolitan area—which has a majority of the following characteristics: moderate to high density, moderate to high building heights, mixed residential and commercial land uses, high walkability, good public transit, and attached buildings which define prominent public spaces.


UPDATE: I just discovered a fantastic post on this subject by the great Jarrett Walker at his Human Transit blog. If this is a subject that interests you, I strongly recommend that you check it out.

Newer Post Older Post Home
Subscribe to: Post Comments (Atom)
This is my personal blog. All opinions expressed here are mine and mine alone.
All photos and sketches are by me unless otherwise noted.
© 2022 Dan Zack, all rights reserved.